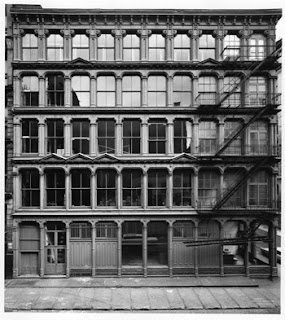 In the early 80s my husband (to be) and I spent a lot of time across the street from 101 Spring, at an early Mission furniture store called Spring Again, where we purchased our first furniture together. Looking wishfully across the street, we always wanted to get to see inside Judd's building. At long last, (on what would be Judd's 85th birthday, June 3rd 2013) after 3 years of painstaking renovation, Donald Judd's 5 story residence and studio at 101 Spring Street in NYC has opened for public view. The renovation by the Judd Foundation has been led by his son Flavin, 45, and his daughter Rainer, 42. It appears to be exactly as it was when he lived there, but now is a climate controlled space, building code compliant, with restored cast iron detailing. It includes works of art by some of his favorite artists as well as his own. Roberta Smith wrote about it in the NY Times last weekend. Smith knew Judd well, as she met him while studying in the Whitney Museum's independent study program, where he became a mentor, a friend and later she became his assistant. She knew him when he purchased this building in 1968, and spent time there in the years that followed. 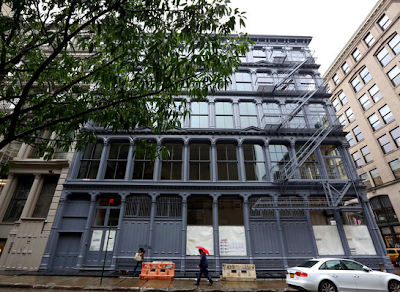 Above: The outside of Judd's building, from a NY Times slide show. It's remarkable how much glass there is in the facade of this cast-iron structure. It was built in 1870, designed by Nicholas Whyte. It is the only intact single use cast-iron building remaining in Soho. This is considered to be the birthplace of "permanent installation". Judd felt that the placement of a work of art was critical to understanding the work. The pieces on view here are just as he left them prior to his death in 1994. On his foundation's web site I found this quote from his 1989 essay "101 Spring St.": 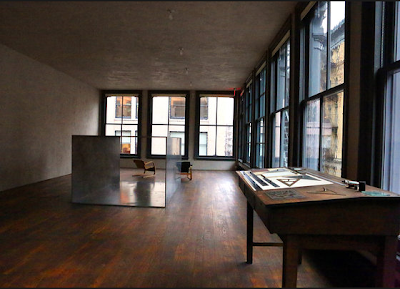 Above: A Judd sculpture, and a desk, on the 3rd floor. 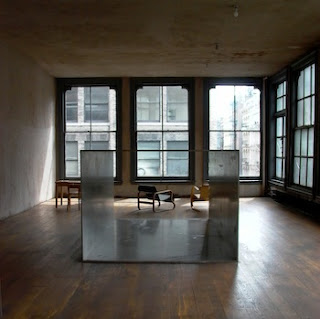 Above: You can see the importance of the placement of art in this photo, an alternate view of the piece above. 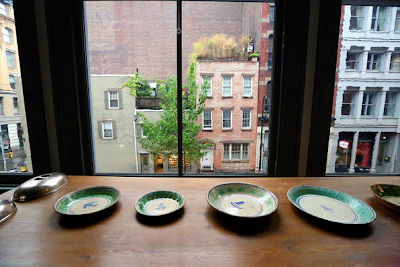 Roberta Smith writes in her NY Times piece (5/31/13)  that Judd "conceived of each floor as a single unobstructed space dedicated to a single activity: sleeping (5th), working (3rd) and eating (2nd)". 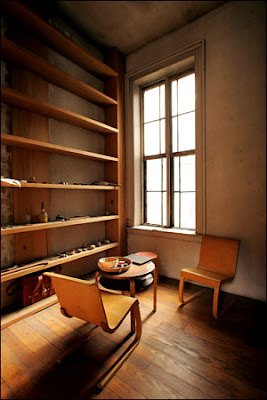 Above and below: A corner of Judd's Library. The furnishings are by Alvar Aalto. 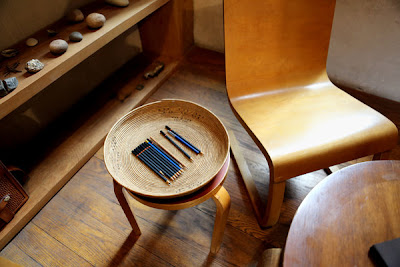 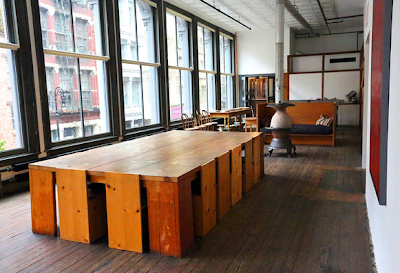 Above: A dining table and stove on the 2nd floor. 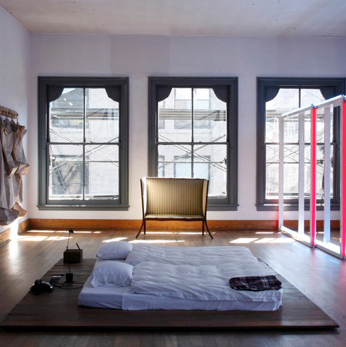 Above and below: The 5th floor, for sleeping. The light sculpture is by Dan Flavin, and the piece on the wall by the window is by Claes Oldenburg. 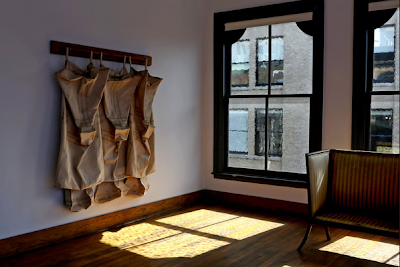 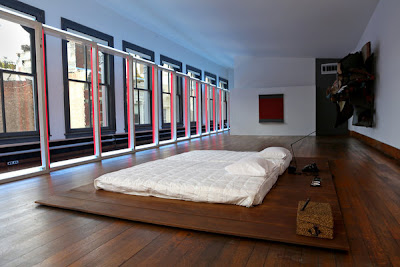 You can read more about Judd's intentions in regard to restoring and preserving 101 Spring St in this essay.

Visiting information can be found here. It's open to the public, but reservations must be made in advance. Walk-ins are only if space permits, at tour times.